In early modern times upper and lower case letter forms emerged; but in upper or lower case form, the letter still represented either the vowel or the consonant.

At the beginning of the printing era (just before 1500) the printers conformed to a newer convention for use of the two forms < v > and < u >.

The letter forms < v > and < u > were ‘positional variants’. These examples show how the convention applied in practice.

It was in the seventeenth century that the vowel and consonant came to be generally distinguished, with the rounded form reserved for the vowel. However, the upper case single form < V > lingered longer.

Until the beginning of the nineteenth century, English dictionaries conflated header entries with initial < u > and < v > into a single reference section. The upper case form of both was < V >.

It was only at the beginning of the nineteenth century that < u > and < v > were finally treated as separate letters, each with its own identity. Dictionaries rearranged their structure accordingly. 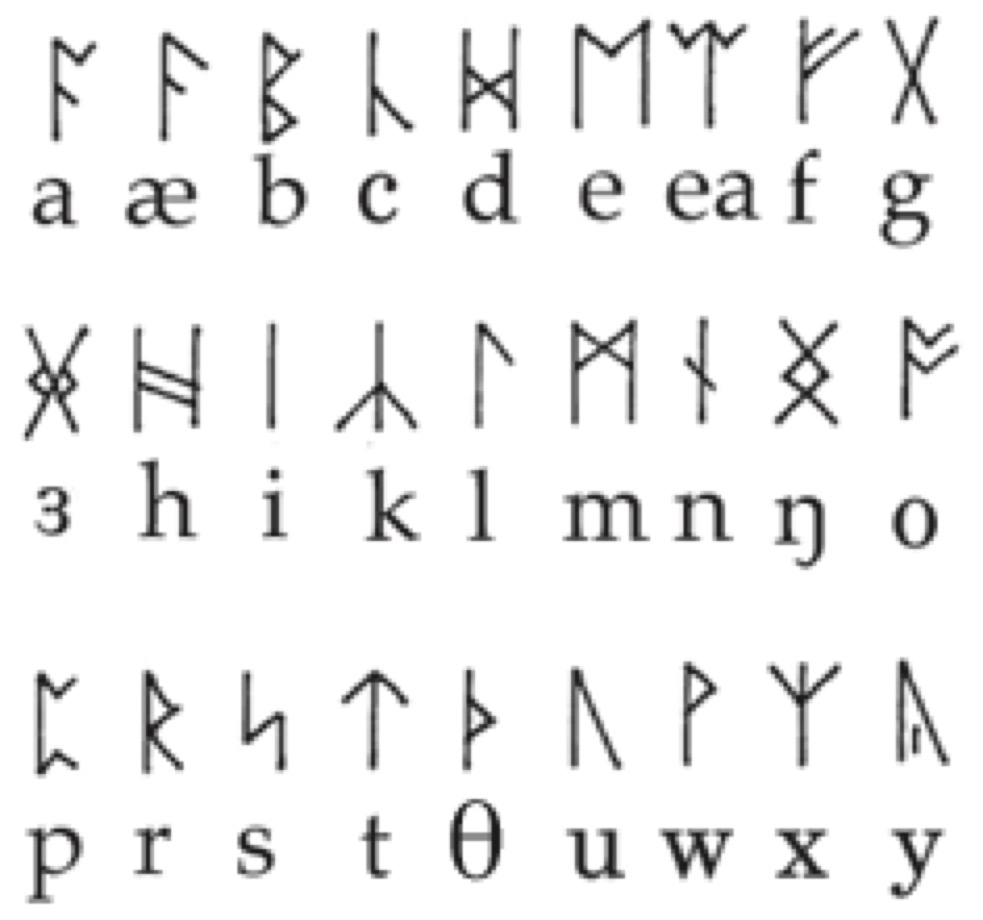 The earliest system of writing Old English was the Runic alphabet that was used by the peoples of northern Europe.

When the Roman Church imposed its control on England its scribes rendered the English language with the Imperial Roman alphabet. Latin had a significantly different phonology from Germanic Old English, so the twenty-three letters of the Roman alphabet were not the best of fits for representing English.

As well as adjusting the functions of some Roman letters to serve English, other letters were invented. One of these was at first written as a ligatured form of a double < v > or < u > (then still just variations of the same letter). The result was < vv > or < uu >.

In the eighth century, the new letter < vv > began to be superseded by the older runic letter < w >, called ‘wyn’.

The letter wyn remained in use until the eleventh century when the French- speaking Norman scribes, who knew little of < þ > and probably regarded it as barbarous, reintroduced the forms < vv > or < uu >.

Since the letter < w > is an adaptation of previously existing letter forms from the alphabet that still retain an individual identity of their own there are a number of writing conventions that preserve distinctiveness of < w > itself. It is because the letter < w > is in essence < u + u > that we avoid writing < uu > in a word of English origin.

The need for, and application of, this convention is best seen in its relevance to a particular spelling. Click on the owl to view a Monty-Pythonesque podcast that explains the completely regular spelling of < rough >.

Of black letters and graphological minims

One further factor that we need to take into account is the history of letter forms and their impact on the establishment of printing.

In the three centuries that preceded the establishment of printing, the formal manuscript style had been the famous ‘black letter’ script, whose component of letter formation was the thick vertical downstroke called the minim.

This stroke also formed letters that we now are led by the schooling manuals to think of as “round”. Here, in a typical black letter script, are the letters < u > and < v >, followed by the words < minim > and < nunnery >.

Consider how this phonological representation of the word that we now spell as < love > would have been written in the minims of black letter script.

Contrast this with the way in which it was written in conformity with the orthographic conventions that the sequence < uv > should be rewritten as < ov > and that a word whose final grapheme is < v > should be followed by a final non-syllabic < e >.

Here is what the result of the word sum < luv + ing > would have looked like without those graphological conventions.

Scribal conventions had evolved to improve the readability of black letter text, especially where several minims were in uninterrupted succession. These conventions were consolidated with the development of printing conventions, even as type faces were evolving to lighter and more rounded forms.

You need to have a comfortable familiarity with the history and evolution of the modern letters < v > < u > and < w > before moving on to the main part of this Theme. Viewing and reviewing this tutorial will help you to do that.

NOTE: Many of these Themes contains special characters for IPA, Old English, or other languages. Not every browser/system supports these: you may see question marks, boxes, or other symbols. You can be sure that we tested them on our computers and they worked there, but if they don't render properly on yours, here are some things you can try.

This is a link to a discussion